The History of Search Engines Search engines have become an essential part of our everyday lives and help us to connect to the near-limitless amount of information available on the internet. Today most people use Google, but this wasn’t always the case.

In 1945, Vannevar Bush published an article in ‘The Atlantic’ called ‘As We May Think’. He urged scientists to ‘build a body of knowledge for all mankind’. The article also mentioned the ‘memex’, which was the name given to a hypothetical hypertext system. In 1968, Douglas Engelbart demonstrated a working version of hypertext, alongside the world’s first mouse and Graphical User Interface. People such as Gerard Salton and Ted Nelson worked on projects involving indexing and ways of storing and displaying data, with projects such as Project Xanadu.

It wasn’t until 1989 that the World Wide Web was created. Tim Berners-Lee took existing technologies such as hypertext and the internet to combine them and create the World Wide Web. The first website would not go live until August of 1991.It is believed that the first search engine was Archie. It was developed by a group of university students, and went live in 1990. Because the World Wide Web was not yet available to the public, Archie indexed publicly available File Transfer Protocol (FTP) sites. In 1992 Tim Berners-Lee published VLib, or Virtual Library. The site listed and linked to many documents from the approximate 20 web servers that were in action at the time. 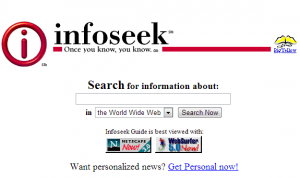 Infoseek was a popular search engine founded by Steve Kirsch in 1994. Its rise to popularity was mainly  due to Netscape, the most popular internet browser of the time, negotiating a deal to use Infoseek as Netscape Navigator’s default browser. Infoseek was purchased by The Walt Disney Corporation in 1998 in order for Disney to build their go.com portal. This never really gained popularity, and the Infoseek name was phased out in 2001.

1994 also saw the creation of Excite by six university students. It grew in popularity and in 1999 merged with @Home Network to create [email protected] @Home was a high-speed internet provider in many countries including the United States, Canada, Japan and Australia. The merger was part of a $6.7 billion USD deal. They struggled to repay debts and filed for bankruptcy in 2001. In 1999, Google founders Larry Page and Sergey Brin offered to sell Google to Excite for $750,000. Excite refused the offer, as they had no interest in Google. Google is currently worth $527 billion. Other search engines released in 1994 include Lycos and WebCrawler.

Yahoo! was also created in 1994 by two university graduates. It did not use its own search engine, however. It used sites that were manually added by humans, as well as indexes from other search engines. It survived the early 2000’s when most other search engines went bankrupt. In 2003, Yahoo! began work on their own web crawler technology and began purchasing other search engines. They were struggling to compete with Google. In 2009, Yahoo! signed a 10-year agreement with Microsoft to use Bing search results in Yahoo!. This was altered in 2015. Now Yahoo! can use other search providers as well, as long as the majority of searches use Bing results. Many Yahoo! searches now use Google results.

AltaVista was released in 1995, and quickly became one of the most popular search engines. Its success was mainly due to its more sophisticated indexing and larger number of search results. At the time, most search engines contained around 2 million webpages, whereas AltaVista contained approximately 20 million webpages. It is considered ‘the Google of its time’. AltaVista was initially an experiment, but when it became popular, its parent company Digital wasn’t quite sure what to do with it. In 1998, it was purchased by Compaq. It started to become more of a portal, rather than a search engine. Compaq sold AltaVista to CMGI, an internet investment company in 1999. In 2000, CMGI filed for an Initial Public Offering (IPO). The results were poor, and the IPO was cancelled. This was mainly the result of two things, firstly, the dot-com bubble. This was when a bunch of internet-based companies had to be closed. This was because investors were investing large amounts of money into new internet startups, but were not making a return. The second reason was Google; which was gaining popularity due to its simpler design and better search algorithm. In 2003 AltaVista was purchased by Yahoo!. They used the name for many years but started to phase it out and use Yahoo! search results. In 2013, AltaVista was completely killed off. AltaVista.com now redirects to Yahoo!. In 1995, Microsoft released The Microsoft Network (MSN) alongside Windows 95. MSN, however was aimed at helping people connect to the internet. It wasn’t until 1998 that MSN became an online portal with things such as news articles. This also saw the introduction of MSN search, a new search engine. This would be replaced in 2006 with Windows Live Search. In 2007, Windows was dropped from the name. In order to become more competitive in search engines, Microsoft developed Bing as a replacement and released it in 2009. Its popularity is mainly due to it being used by people when visiting MSN.com and Outlook.com (formerly Hotmail), as well as being the default search engine in Internet Explorer and Microsoft Edge. It is also used by Cortana, Microsoft’s virtual assistant.

Google was started as a project in 1996 by two university students. Search engines at the time sorted results by how many times the search terms appeared on webpages. Google’s approach would be different. It would try and list the most relevant pages first. By the end of 1998, Google had over 60 million webpages in its index, which was 3 times more than any of their competitors had at the time. Google kept growing not only in size, but also in popularity. Google was also extremely simple to use, and unlike its competitors, its homepage was quite bare and was not a portal. These different approaches worked well for Google, and they became a public company in 2004. Since then, they have significantly expanded to many other areas, such as email, software and even operating systems and become one of the world’s most valuable companies.

Currently Google has 70% market share, Bing has 12%, Baidu (a Chinese search engine) has 7% and Yahoo! has 7%. Many other search engines that exist today get their results from either Google, Bing or Yahoo!.